The ADVENTure - a Christmas themed card table for this game is available now!

The adventure is a journal writing game for a single player. During the game you will be creating a world and filling it with it's own people, traditions and folklore by journaling your characters adventures in it.
All you need to play is something to log your journey in and a standard deck of playing cards.

Game play revolves around drawing cards, interpreting it;s meaning and then creating a journal entry to document your characters adventure. Cards a divided into four piles by suit, each suit meaning a different thing.

Check out this video by Lunch Break Heroes that explains the game well!

There is now an online card picker that makes it easy to play The Adventurer at your computer when you do not have cards to hand.

In order to download this game you must purchase it at or above the minimum price of $5 USD. You will get access to the following files:

A writer's block shatterer. Powerful simplicity which stands on its own and integrates well into pretty much anything else, if desired. I have an ongoing, meandering solo tale (will our nameless, successful avenger avoid pursuit and make it back home to his wife'?). I also used it to handily generate a quick backstory with some solid narrative hooks for a tradgame character.

The self-contained nature of the online card picker means you can save the page as a .html file and use it on any device of your choosing, connected or not. This helps neatly avoid the necessities of sorting and shuffling cards to begin or to continue a story, and minimizes the potential distraction of notifications from Online (for me anyway). I may add in the aura, oracle, city, and a couple other custom tables for myself at some point in the future, but mostly I'm happy the picker exists at all.

Do give this a buy, if you can.

Thanks for the comments. I am so glad that you are enjoying this little game. It always means a lot to hear from people who are getting something out of the things I create.

It's not a coincidence that The Adventurer is always pretty high among the physical games!

I've got a cool story from the game, thank you!

This gives me strong The Quiet Year vibes. Loving it!

Hello! I love this game, and I'm in the middle of an adventure right now. While the basic setting seems to be a quasi-medieval fantasy style universe, I wondered if the basic concept could be transferred to a modern superhero universe. I'm working on a card table that will include people, places, things, and events commonly found in superhero comics, movies, and TV shows. Would you be interested in seeing it? Would anyone here be interested in playtesting it? Please let me know.

I would playtest it for you, and do some art from my playtest. w_caddell@aol.com

That sounds great! Thanks so much. I'll send you the table later today. Please let me know what you think of it, and feel free to make any suggestions for improvement. Thanks again!

I would definitely be interested in playing your game!

The first story I came up:

I start in the forest because I don't like the city I live in. I think it's too boring and I love the forest. I was camping there for a while before getting back to the city.

While getting back,  I got kidnapped by some angry guy working for the king. He hit me, I fell unconscious and I wake up in a house I could not recognize. Then I succeed to go out the house and run. The guy saw I was out and ran after me again. I was scared when I discovered my magical power. I can communicate with plants. The guy got hit by a oak.

After this adventure I was tired, and I sat near a road leading to the forest when I met a traveler, that will later become my best friend for the rest of the story.

Back in the wood, we start a shelter using the camping gear I got with me from day one. It was fine until the next day when a very hard thunderstorm started. We moved to a cave to protect ourselves.

That's where we heard some heavy breathing sounds from the back of the cave. We discovered a dying woman. She was very ill. Unfortunately, none of us got anything to heal her or any knowledge about medicinal plants. The only thing we done was giving her water and some food, even tho it calmed her pain, she was still dying. She actually died a few moments later.

We buried her near the cave, very sad of what just happened, both in shock. Then we looked into her bag to find her identity to report the death. She was actually an elf coming from the city of Alsen. One of the most powerful city of the area. We got to there and met her father near the church. We reported the death, and unlike what we thought the father wasn't sad, he was happy of finally knowing where she was. We passed the night talking with the father.

Then we continued our journey. Archid (my friend) got to the coast. With all these events, I decided that I would never go to my home city ever again and continue traveling.

We arrived at the harbor, took a boat and a few days of navigation later arrived to his home town. I met his family. They explained me that the king of the country betrayals the citizens and he got proofs. He wanted to overthrow the king and reveal all the corruption and the truth about the king to the citizens.

Me and Archid joined the fight. We created our base in the forest so the king's guard could not get us. At that point, we created an autonomous zone. We were planning the final attack.

We send the hidden documents talking about the murders organized by the king, the betrayals, etc to the citizens. Those became angry and started making their own autonomous zones. The king was slowly loosing control over everything.

At the beginning of the story I was bored of living in the city and doing boring tasks. Now I finally feels alive and useful. But the fight is not over yet. It just started.

It was pretty fun to write. Not a good story but still fun. Thanks for creating this!

hi, thanks for playing glad you enjoyed it.

My toki is really rusty at the moment, ill have to try translating that when I get home and have the book handy!

Hi. I've just done a french translation for The Adventurer.

Are you interested about it ? Were can I send it to you ?

hi, sorry about the late reply. I have been busy an unfortunatly neglectful of my responsibilities!

Thanks you the interest. I would love to see it you can email me at info@jameschip.io.

I don’t know if I can hist it anywhere as it’s not something I could ever update it maintenance but if you host it I can certainly link to it and credit your work.

This is one of the first games of this style that I've ever played, and I couldn't be more pleased. With simple, but compelling prompts, this game made me genuinely emotional about my little adventurer and their travels. I'm still in the middle of playing, but I'm very eager to keep going. Highly recommend!

Thank you for the quick fix and the prompt reply. I'm in the middle of a game of The Adventurer right now and enjoying it very much. Cheers!

I've noticed a slight problem with the online card picker.  When you click on Spades, you always seem to run through the cards in order, while the other suits seem to be randomized.  Shouldn't all the suits be randomized?

Thanks for pointing this out, it was in fact a bug that had been fixed before but the changes had not been pushed. Oops. All of the suits should be random now I have pushed the updated page.

Sorry for the inconvenience and thanks for playing :)

Would it be possible to make the card picker a standalone app that would be useable on mobile devices? (Laptops, smartphones, tablets, etc.)?

there are no plans for stand alone apps at the moment although I do intend to come back to the card picker and make it fit to mobile screens nicely.

I am quite busy at the moment so it’s having to wait a bit; but it is on my todo list.

This is a very simple yet engaging game! You simply draw cards as prompts and write journal entries in the POV of your character based upon them. I haven't finished my campaign yet but it also seems pretty easy to pick back up again (I just separated my used cards from my unused cards), but it's been quite a journey so far.

If you're looking for a fun and simple roleplaying game you can play by yourself and let your imagination run wild, I highly recommend this game! You just need a pen and notebook (or you can type on your computer) and a deck of playing cards! If you get bored with the default prompts, it even comes with a blank card index so you can fill in some prompts of your own to further your adventure!

Used this tonight in conjunction with a rules light, one page TTRPG I put together.  My wife and I ran a duo adventure, each of us recording a log in our own notebook.  This was a really nice complement to the light rules I've put together...those provide some crunch, this provided the story and structure.  Very well done, simple and elegant.

Hi there, would you have any suggestions for somebody who would like to add a small set of rules on top like you did? I am also thinking about playing with my partner :).

Any rules light system should work.  The Adventurer is going to flesh out the story, but it doesn't have rules for combat, skills, actions, etc.  If you search for 'rules light rpg' or 'one page d&d' there are many systems out there that will provide that structure.

Everything Dethb0y says in his review is spot on. This is such a light and flexible game, and it really helps prompt some great creative thinking.

I just started playing through this last night, and I love it. I used to journal and write creatively, but I've been in a slump for a few years. This helped me break that last night, and it feels so good to write again. Thank you. I'm looking forward to diving deeper into the stories this game is prompting.

Absolutely excellent game - small, easy to pick up, allows an enormous amount of player flexibility while providing enough hints to really feed the creativity! I highly recommend it, and it would make an excellent first Solo RPG for anyone who's curious to get into it, as well as being a useful tool for someone who is more experienced and needs a way to generate plot points or events for an adventure. 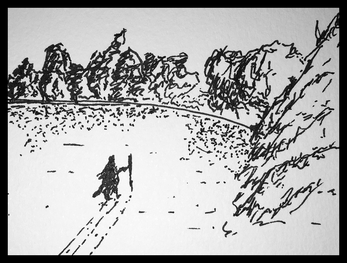