Equa! is an very minimal OSR adjacent game system for tabletop role playing games.  The whole of the game is formatted as a small set of equations that represent the mechanics of play, how you use them is up to you.

This is about as minimal and esoteric as a game can get.

Will this work with X module I have?
I don't know, maybe, try it out.

Does this have X mechanic in it?
No, it doesn't.

I was attracted to equa! because of the notation. To "my eyes" certain things were standing out and I thought I would make the following suggestions:

* Brawn and brawn are two different "variables" (similarly for the others). I would suggest they all are spelled in lower case (upper case letters usually denote sets). You preserve case for Cunning but not brawn so maybe I missed something (?).

* tn=stat does not make immediate sense. (stat is undefined).

* Weapon damage. I understand the intention. But the branching definition (with the ifs) points to something that works like d(w) rather than wd. Or wd(weapon). This would make it consistent with death and success.

* Weapon damage. Ok maybe this is taking it too far but you can work out weapon damage by the "load out". wd seems to indicate that there are only three weapons and a single "load out". That is, you can only bear ONE weapon at a time. Which is fine. But if you made the loadout part of your character's stats, you could represent more eventualities and richer gameplay. That is, where you have acrobatics, brawn, cunning add a variable loadout. loadout is a ROW vector of zeroes and ones. In the core equa! universe the player inventory is a column vector with the weapon damages. That is, your weapon inventory looks like [1;2;2] where by convention, each entry of this COLUMN vector denotes damage effected by dagger, sword, axe. The reason for specifying what is a row and what is a column is to be able to express wd as a matrix multiplication between the player's loadout and the universe's weapon inventory (in this order). Your wd then becomes wd=loadout * W where W is the Universe's weapon inventory. In core equa! the loadout of each player can have only one 1 at any given time. But you can then have variants of equa! with different Universe capabilities where the loadout can have more than one 1 in the loadout. For example, a scenario where loadout=[1,1,0] to denote a player equipped with both a dagger and a sword. In this case the damage they deal is d=[1, 1, 0] * [1; 2; 2] = 1*1 + 1*2 + 0*2 = 3.

* A similar comment applies to mt. This is because the player selects the effect but the three grades of the effect are part of the Universe. For example, a player cannot say that they would like to apply a "blue" magic. The immediate question would be, "what grade is its effect?". So M is really part of the universe in a way the weapons inventory (W) is too. And you could have a magic loadout and spell inventory too, or combine the two in one but that might then start acting in a restrictive way for the story. The current M allows you to cast anything you like and only specify its strength.

* Again, maybe this is the concern of equa! variants, but you could have an M that scales like 1, 4, 5 to emphasise certain levels of Cunning.

* So, taken together, the Weapons inventory (W) and M define here an equa! variant which of course could also be tied to certain story elements.

Hi! I’m thinking if brawn should rather be defined as:

Otherwise this is rather simple and cool. I really like cast(mt)

the LaTeX format made me want it.

I have a question, though. If any of your 3 stats is determined by a d6 roll, it may happen that you roll a 6, and thus any action related to this stat would result in a success, because tn will always be lower or equal to a d6 roll.

how would you solve this equation?

I have actually fixed this now.

I also flipped the equation so that it is d6 < tn which makes more sense than tn < d6, making it that the higher tn the better you are at the task rather than the other way round.

The way I had it was fun but it also made y ou get exponentially better as your Brawn decreased through damage.

Thanks for your interest.

mmmmm now you have another problem if a player rolls a 1 as any of their stats. They can't succeed. But that might be "by design" (poor PCs)

It’s rather a better “balance” that a character be bad enough at something to not be able to do it than it is to be awesome and never fail.

With an Acrobatics of 1 a player will still be adept enough to run, roll and jump as normal, but trying to pirouette on a balance beam is always going to be a failure.

that makes sense. thanks!

Oh this has my attention and now I want to drop all my projects to hack on this!

Any thoughts about releasing the original LaTeX file?

I’ll upload the tex file in the morning when I am back at my laptop! 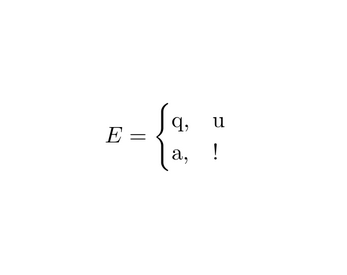 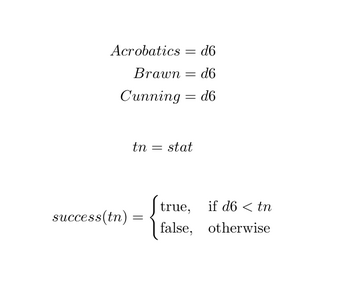