Part game where you create an adventure by drawing cards, part guilde on creating content for the web.

This quick guide will introduce you to creating content for your ttrpg to publish in both html and ePub formats,using pandoc to create both outputs from a single file.

The 'traditional' way of publishing your ttrpg online is to use a pdf, which is fine. Its not the best format though.

While a pdf is a great format for printing it is often not the best choice for screens. See the many times you have likely had to zoom in on a column and constantly scroll in all four directions to be able to read the tiny text.

Publishing your ttrpg as an ePub, or even html for the web, can make your content much more readable on devices like phones and tablets.

This is a really quick introduction to these topics in the guise of an adventure creating game.

You will finish this guide with a basic knowledge of how to get going creating thhis kind of content, but it is beyond its scope to make you a fully fledged expert. It will however armed you with the tools to keep learning for yourself.

Bear in mind that both html and ePub are not a pdf. You should not create the same complex and rich layouts that your would for print in a pdf, they are different formats intended for different reasons.  You can still create fantastic and beautiful work,  just the style will be different.

This does not make one better than the other any more than a screwdriver is better than a hammer.

Source for this guide.

Hey! Here's the location I made through this guide!

Thank you so much for making this guide!

Thank you for this guide! I made a little module with it and I’ll publish it whenever I get the time to set up the itch page.

So my question now is: what if I want to make something bigger with a navigation bar? how should I go about it?

I am glad you found it useful and look forward to seeing what you publish!

This is a bit I intend to add in the near future! Pandoc actually has the ability to generate a table of contents automatically. Ill add the details to the tutorial soon but the basic steps are:

2. Addthe flags  -s --toc to the build command for the web output.

This will should automatically generate you table of contents on your page.

Wow. Pando is… Deep! I’ll try it and let you know of my (lack of) success!

another question (as a reply to not spam the comment section)

what do I do if I want to use different fonts? do I have to copy them into the folder? what is the line I have to write to point? what if a font type for headers and another for body text?

edit: someone has told me that "cd documents/markdown_kaiju" would work its no first slash. I have no confirmed yet though.

okay if anyone is bouncing hard off "navigate to the directory using your terminal" after some help and still requiring a lot of trial and error, i got it figured out.

it seems you need to do every step by itself, you cant seem to just drop a multi directory address there, so if its not in c:, first thing is navigating to the correct harddrive (for me it was e:)

then instead of dropping "/documents/markdown_kaiju/" which didnt work, I had to first type "cd" and then the next step in the address. in this case:

heres a screen shot of things that didnt work and did:

Also: If you are testing it out and nothing seems to be working, hit the next page. It seems to generate a (until you play around with covers i'd guess) blank page at first that'll just have your title on it. I spent a lot of time trying to figure out what went wrong with my code before realizing that.

You could be falling over a couple of different problems with the design and implementation of Windows here.

I could argue the folly of drive letters vs mount pointsall day, but it is what it is.

While cmd.exe says that it supports / in paths as well as \ as a way to become compatible with every other system on the planet, the truth is that it does so very badly. There are loads of edge cases that fail on this.

It could be that cmd is seeing the /d in /documents as a flag wanting to change drive and then finding no valid drive after that. I would recommend always using the windows style path separator to avoid these problems. It might work if you used:

But unless you need an absolute path (starts with a slash which means its a path that starts at the root of the lettered drive) I would always recommend  using a relative path.

Great that you got this running in the end though, I should add a section with some links to info on navigating the terminal for people who need it soon.

I have gotten help from another party, that says there should be no slash in windows between the cd and "documents" (or wherever you are heading) and that seems to have fixed the issue i was running into, i'll definately try to do the "/d" and see if that helps the swap to e:  along with everything et al. ^^

Yeah i was mostly trying to toss something quick out to help folks running into the same issue as I was with this, instead of just bouncing off of it xD 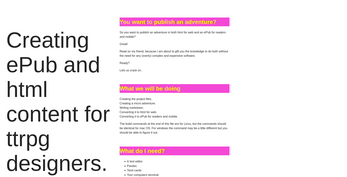